Easter Traditions from Around the World

Easter Traditions from Around the World

If you hadn’t already gathered from the chocolate eggs piled up like mountains in the supermarkets, Easter will upon us very shortly.

This year, Easter weekend begins with Good Friday on Friday 2nd April, through to Easter Monday on 5th.

While most of us in the UK celebrate by gorging on chocolate or paying our respects in Church, other countries around the world have adopted their own unique traditions during Easter.

Easter is known as Semana Santa, or Holy Week, in Spain, and celebrations continue across seven days.

Festivities commence during the last week of Lent and are marked by large-scale religious processions in almost every town across the country.

Rather than chocolate eggs, the Spanish enjoy something similar to French toast called torrija, pestiños and cakes.

Just like the UK, Good Friday and Easter Monday are public holidays in Germany, and they mark the occasion by lighting bonfires at sunset on Holy Saturday.

Some regions mark the Easter bonfire known as osterfeuer, with festivals with food and drink stalls selling wine and sausages, and rides for the kids.

Some communities take large bales of straw and push it into a wooden wheel, set it alight and roll it down a hill, this is known as Osterrad.

Ostereierbaum is another tradition in Germany, where an Easter tree is decorated with hand-painted eggs. Families will often use a house plant or tree for this, whereas others will choose to decorate outdoor foliage and trees.

It’s also traditional throughout Germany to eat something green on Gründonnerstag, or green Thursday. Spiced bread with almonds and candied peel raisins are a popular choice during Easter too.

The Pope will traditionally lead the Easter celebrations in Italy, hosting mass on Good Friday at St. Peter’s Basilica where the Station of the Cross (Via Crucis) is celebrated.

During mass, a crucifix constructed of burning torches is raised into the night air.

Throughout the Italian city of Florence, Easter Sunday is celebrated with Scoppio Del Carro, a custom dating back centuries in which an intricately designed antique wagon of sorts is packed full of fireworks, set alight and hauled into a square by oxen and people dressed in 15th-century garb.

In other parts of Italy, religious parades are undertaken over the course of three days, in which people dress in ancient attire and parade relics, statuettes and olive branches through the streets.

One of the most popular Easter treats in Italy is the Colomba di Pasqua, a cake similar in taste and texture to panettone. 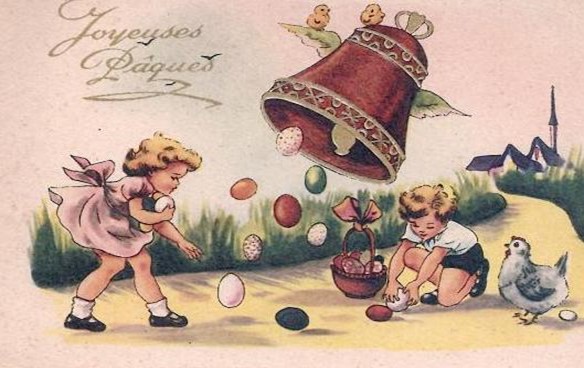 Similar to Spain, much of France’s Easter tradition originates from Catholic practices, which normally means Easter is widely celebrated as a very religious event.

Over Easter, tradition determines that church bells are to cease ringing as a mark of respect for the death of Christ, and young children are told that the bells are sent to Rome to be blessed by the Pope himself.

The morning of Easter Sunday – the resurrection of Jesus – the bells are said to fly back to France packed with sweets, which are dropped into the gardens of the children. Once they are back in their steeples the bells begin ringing once again.

Rather than the Easter bunny, it is the Cloches de Pâques (flying bells), who brings the Easter eggs to the children. Once the bells are chiming in earnest, the egg hunt can begin.

The food during this time in France is often very simple food, such as lamb, potatoes, cheese and chocolate.

Throughout Central and Eastern Europe, a centuries-old tradition revolves around people trying to soak each other with buckets of water, on Easter Monday.

Known as Wet Monday, or Watering Monday depending on the country, the ritual is said to have originated as a fertility ritual of sorts, where the water is supposed to have a cleansing effect to create a healthy body during spring.

If you have any further questions on what we’ve covered in this blog, or you’re interested in hearing more about any of our other services, get in touch today.